Women and Opposition To War 1

Even before the war broke out in August 1914, the leading German women’s organisation was ready with a plan for a National Women’s Service offering patriotic support for the war. They organised women to replace the working men who had volunteered or been conscripted into the army, dispensed food and home management advice to struggling families, and packed comfort parcels to send to the front. But there were other German women who were horrified at the outbreak of war and saw it as their patriotic duty to oppose it. Socialist women like Rosa Luxemburg and Clara Zetkin, pacifists like Helene Stöcker and Constanze Hallgarten, and feminist internationalists like Lida Heymann, Anita Augspurg and Minna Cauer. These women found ways round the tough wartime censorship, the persecution, bans and imprisonment to speak out against the war. This talk will tell their story. 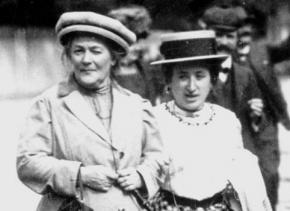 This paper scrutinises the elusive and extraordinary lives of two anti-war Manchester women, Phillis Annie Skinner and Maud Hayes. Both women were arrested and imprisoned in 1917 in what became known as the ‘Peace Crusade Case’.  Both women were involved with the No Conscription Fellowship and were involved with men who were imprisoned as conscientious objectors. Phillis and her husband Allan were both members of the Independent Labour Party. Exploring the case within the wider context of the anti-militarist Women’s Peace Crusade, which ran like wild fire across the country in 1917, the paper will also look at how fragments of a life can be pieced together using archival research and some serendipity.